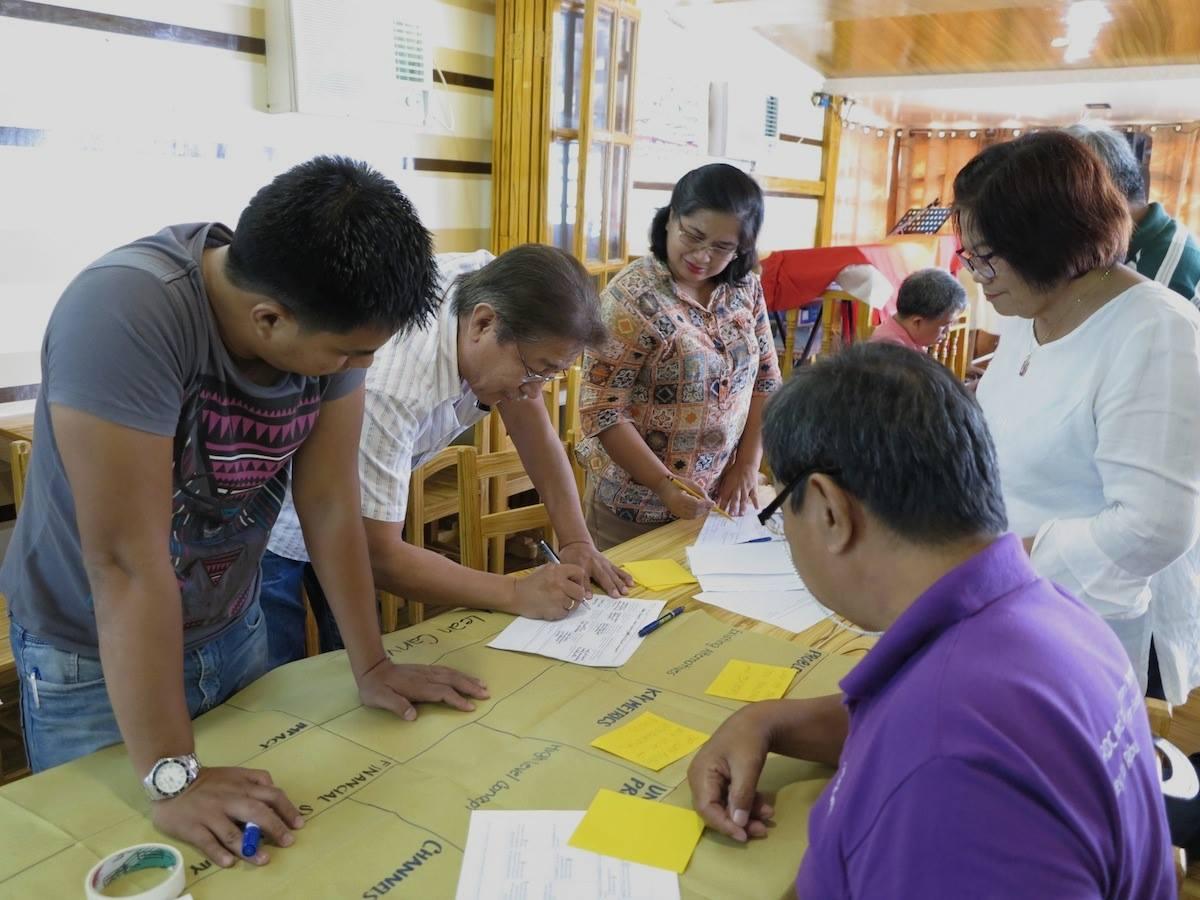 In addition to its core partners, the VakaYiko Consortium included seven grantees in Argentina, Ethiopia, Kenya, Nigeria, Peru, the Philippines and Sudan. These grantees were universities, think tanks and civil society organizations who received support from the Consortium to implement specific innovative approaches to strengthen the capacity for evidence use in policy making.

The grants scheme was an opportunity to test different ideas and approaches to understand and enable the use of evidence, and to expand the VakaYiko network of organizations working on EIPM. VakaYiko grantees shared their learning through roundtables and engagements with the wider Consortium as well as through a series of case studies.

Following previous experience in virtual learning, Politics and Ideas (P&I) aimed to create an online course which would not only address technical abilities, with concrete tools and methods, but also address how to approach common challenges, taking the political economy of evidence use and policy making processes into account.

In the final year of the VakaYiko programme, Politics & Ideas partnered with the African Institute for Development Policy (AFIDEP) to adapt and pilot the course in four African countries: Uganda, Ghana, Zimbabwe and South Africa. The second round of the course was informed by the learning gained during the first round in terms of methodology and relevant content. It also incorporated the experiences of former participants.

Online course promotes the use of knowledge and evidence in policy 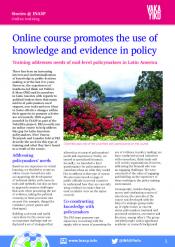 Jimma University received a grant to develop a programme to strengthen the capacity of Ethiopian health professionals and decision makers to access, critically appraise and use evidence in policy making.

With an aim to embed a culture of evidence use in the Federal Ministry of Health, Jimma provided training and paired participants with mentors to support them on their current policy projects.

A course on ‘Building research evidence utilization capacity of health planners and policymakers’ was delivered with the Ethiopian Federal Ministry of Health in Addis Abba during September 2015.

The mentoring programme ran for six months, and Jimma University created an online community to support continuing discussions amongst the group.

Those involved in the mentoring reported that the project had improved their skills, knowledge and attitude towards use of research evidence for policy and programme design. Several participants reported that the mentoring provided an opportunity for them to put what they had learned during the training into practice, and to get feedback on what they were doing so that they could continue to improve their approaches. Not only had many of them made strides in tangible areas of work – such as initiating disease prevention programmes or setting directives, they also reported increased motivation, creativity, confidence and improved communication skills.

In Kenya, VakaYiko grantee the African Centre for Technology Studies (ACTS) developed a job-shadowing scheme, in parallel to a series of roundtables, which paired two ACTS scientists with two policymakers to bridge the evidence gap in Kenya’s climate change bill.

A re-drafted Kenya Climate Change Bill has passed the National Assembly, and a draft climate change policy is due to be published by the Ministry of Environment, Water and Natural Resources.

The ACTS scientists structured their plans to fit within the legislative cycle, attending specific sessions where MPs were debating climate change or other relevant issues. The Policy Fellows and Scientists met regularly and participated in the Kenya Climate Change Science, Technology and Policy Roundtables, where they shared their knowledge and ideas and, most importantly, heard first-hand from different stakeholders on what areas should be prioritized. The researchers worked with the policymakers as they reviewed and contributed to the second reading of the bill, and also co-produced two papers on evidence-informed policy making in climate legislation and policy in Kenya. As a think tank, ACTS also had access to various resources related to climate science, and the policymakers were able to access these resources as well as ACTS’ research facilities and support services for the duration of the scheme.

ACTS observed that discussions between the researchers and policymakers have resulted in better understanding of how evidence can be effectively packaged for different types of stakeholders, from brief summaries for lawmakers to technical reports and data for ministries and government departments. The job shadowing and roundtables combined provided an opportunity for the scientists and policymakers to apply the knowledge gained as they work on climate change policies. At the core of the design was the scheme’s ability to transmit knowledge and expertise between the scientists and policymakers, building trust for long-term collaboration. 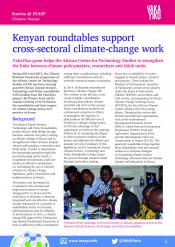 Enhancing Data Use in Local Government Decision Making in Nigeria

In Nigeria, the Improving Information Literacy for Urban Service Planning and Delivery (INFO-LIT) project, devised by Lagos-based think tank the Center For Public Policy Alternatives (CPPA), aimed to strengthen the understanding and use of evidence by local government in urban areas of Nigeria for more consistent and cost-effective public services. INFO-LIT aimed specifically to develop the capacity of staff in the state’s Health Service Commission, Lagos Waste Management Authority and the Lagos State Environmental Protection Agency to collect and use data.

Training was contextualised, through local examples and case studies, to ensure it was relevant to participant’s day to day work. 59 participants included staff responsible for data collection in the field, analysis and decision making, and the sessions brought participants from the different agencies together to foster inter-agency collaboration.

Senior policymakers were initially reluctant to engage with the project. To reach these, INFO-LIT enlisted the support of the Public Service Staff Development Centre, a state training and capacity-building agency. The project was able to benefit from the convening power of the centre to secure buy-in from senior officials in target audiences. Their involvement in the design and delivery of the training helped to make sure that the content was received positively by participants.

After the workshop, the centre’s management decided to incorporate the training modules into its own curriculum for local governments and other service agencies. This was a huge success for the project and a positive sign for information literacy going forward. 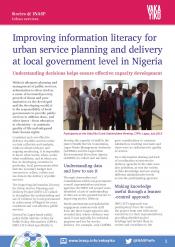 Building Networks Across the Research-to-Policy System in Peru

With support of the VakaYiko grant, the Peruvian Alliance for the Use of Evidence sought to create and maintain a safe space for debate on evidence-informed policy making issues.

The Alliance organized nine internal meetings and five public events in 2015, two workshops and an international panel at the Global Development Network’s Annual Conferences in February and March 2016. The internal meetings served to introduce new members to the network and to provide a safe place for the members of all sectors including ministries and other public institutions who generate evidence to sit and discuss with those who produce it.

The public events made it possible to reach out to a much broader audience by addressing topics not usually associated with evidence-informed policy discussions (e.g. the value of the testimonies of victims of political violence in policy) and new challenges whilst encouraging public discussion.

In addition, the Alliance organized workshops in response to requests from the participants of the meetings and public events and was also able to take advantage of windows of opportunity, such as organizing a public event on the value of testimonies as evidence for policy making to support the Lugar de la Memoria (Peru’s newly inaugurated museum on the political violence of the 1980s and 90s).

The grant enabled the Alliance to meet a growing demand for reflection, and for developing new skills for growing number of young professionals working in and outside government and in various disciplines and sectors.

Creating space for evidence based policy debate in Peru 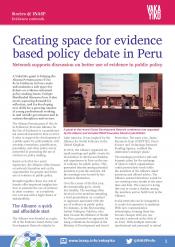 Ateneo de Manila University received a grant from VakaYiko to develop a capacity development programme to address gaps in education reform in the Philippines. The aim was to introduce the use of evidence in informing policy making and to increase the demand for accessible data and information across agencies of government, especially between national and local governments. The programme addressed the need for the executive and legislative bodies at the local level to learn together and understand what data means and how it can be used from a policy perspective.

Face-to-face training gave elected officials, civil servants and civil society groups the opportunity to learn from each other constructively. The training consisted of four modules:

Following initial training, a three-month online and face-to-face mentoring engagement was conducted between training participants and institutional partners as they went through the adoption and implementation of policies to address collectively identified concerns in education. The mentoring phase provided the space to begin working together and test the most viable policy alternative to address common concerns in education.

The project led to the formation of a relationship between two crucial stakeholders in education reform (Ateneo de Manila University and the Department for Education), successfully bridging the gap between evidence and policy-making at the sub-national level of government.

Improving capacity for evidence-informed education policy in the Philippines 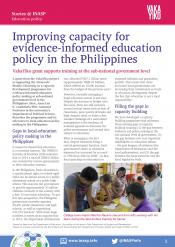 Evidence and Gender Issues in Policy Making in Sudan

VakaYiko awarded a grant to the Gender Centre for Research and Training (GCRT) for a project aimed at developing the capacity of policymakers in the Ministry of Labour and the Ministry of Education to find, critically assess, and use data and research evidence in policy making. The training workshops were combined with a public conference.

Four modules were prepared for the training, using focus group discussions to adapt parts of INASP's Evidence Informed Policy-Making Toolkit to local needs and context. Gender aspects, including gender mainstreaming, were developed and added to the materials in order to develop the capacity-development sessions.

30 mid-level staff took part in a four-day training course for each ministry. More than 70% of the participants were women.

The political and social nature of gender training raised challenges at individual and institutional levels. Challenges at the institutional levels included a lack of political will to address gender issues, the dominance of one party ideology and lack of gender units to provide training on gender issues including data collection and gender analysis. Challenges at the individual levels included misconception of gender concepts, norms, and traditions. Case studies, examples, questions and answers acted as a means to challenge some of the misconceptions and to link gender concepts with local needs and reality.

Participants and the heads of the Ministries requested that the centre deliver further training, including to policymakers working in other regions outside of Khartoum where resources are more constrained. 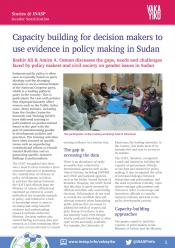 Helping government organizations improve their use of knowledge for policy making by understanding context.

VakaYiko awarded a grant to Politics & Ideas (now Purpose & Ideas) to develop a Framework  to help policymakers, researchers, practitioners and donors better define windows of opportunity in different contexts to focus efforts on promoting better interaction between knowledge and policy.

The Context Matters Framework  helps users better assess the contexts in which they operate and, based on careful assessment, detect where the potential for change may be greater (and barriers more significant). By applying this lens to a particular government setting, users can identify what to do, with who and how more effectively. 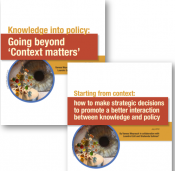 Peruvian Alliance for the Use of Evidence
Logo

Gender Centre for Research and Training