Back to publications
Cover picture 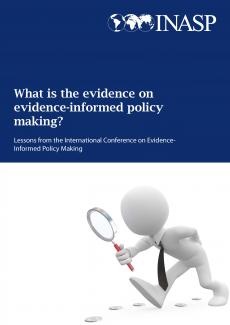 This is a report on the lessons learnt from the International Conference on Evidence-Informed Policy Making (EIPM) held in Nigeria in 2012.

Lessons from the International Conference on Evidence-Informed Policy Making (EIPM)

In February 2012, over fifty delegates representing eighteen countries and four continents attended the International conference on Evidence-Informed Policy Making in Ile-Ife, Nigeria. The purpose of the Conference was to go beyond anecdote and assumptions and to focus on the actual evidence on EIPM. During the three day conference, participants discussed research which has examined the communication of research to policy makers; the capacity of policy makers to use research; the incentives which drive policy makers to use research and much more. The resulting discussions were enlightening and stimulating. The conference revealed that even amongst those working in the field, there are divergent views on what evidence-informed policy is and how it relates to policy influencing agendas. It also became clear that in some areas there is a lack of robust research evidence. In particular, there is a shortage of evidence on policy makers' actual capacity to use research evidence and there is even less evidence on effective strategies to build policy makers' capacity. Furthermore, many presentations highlighted the insidious effect of corruption on use of evidence in policy making processes.